Disclosure: This post contains affiliate links, meaning, at no additional cost to you, we will earn a small commission if you click through and make a purchase.

Refresh and vitalise your skin with a gorgeous DIY exfoliating soap with Himalayan salt! Suitable for your hands and body, the salt crystals provide gentle exfoliation and cleansing, while the added vitamin E oil nourishes and moisturises the skin. These handcrafted soap bars are made with a melt-and-pour soap base so you can have them ready in no time.

In honour of spring, I scented the soap with a beautiful magnolia fragrance and added a pretty floral soap embed, making the exfoliating bars great gifts for Mother’s Day, spring birthdays or beauty lovers all year round. You can, of course, use any other fragrance or essential oils of your choice. Read on to learn how to create this homemade exfoliating soap and how to make the cute flower embed! 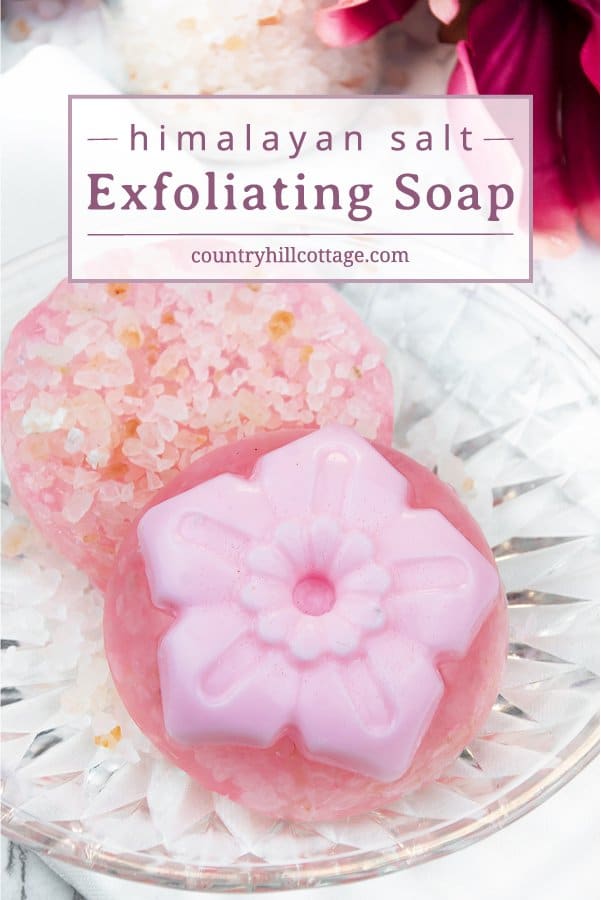 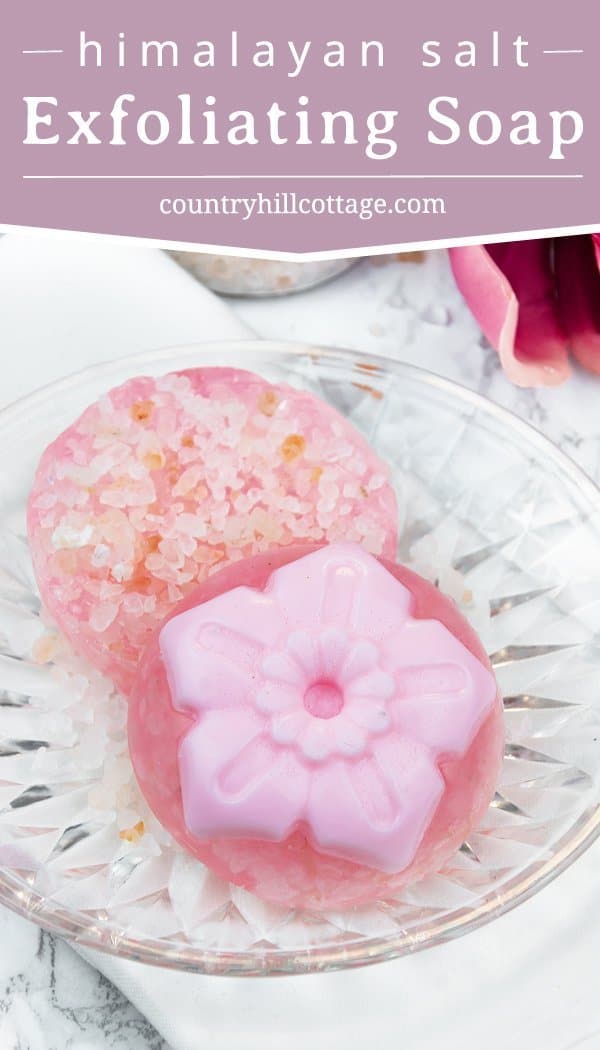 What materials do I need to make a DIY exfoliating soap at home?

I recently shared sugar soap scrub bars made with sugar, soap and coconut oil that are gently exfoliating (definitely give them a try ). This DIY melt and pour exfoliating bars have stronger peeling effect. Here’s what you need to make these exfoliating soap bars at home: 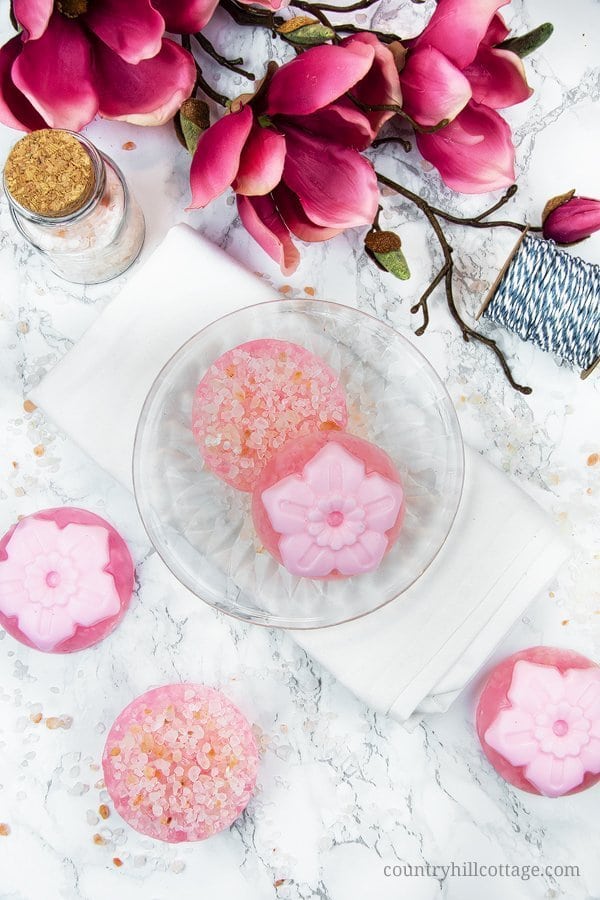 Melt and pour soap base

The floral embed is made with a white, opaque melt and pour soap base. I used a goat’s milk soap base as this what I already had at hand. This soap base has a creamy lather and milky white hue, which is perfect for adding any colour or fragrance. You can also use shea butter, Castile,  or cocoa soap base instead. Just take into account when choosing a fragrance that cocoa soap base has a distinct chocolate smell. Each soap base behaves a little differently, so it’s a good idea to check the manufacturer’s recommendations.

The base of this soap is created with clear melt and pour soap. I used a clear soap base to create a contrast to the flower and make the salt crystals visible. When pouring the soap, work in layers, so you have salt throughout the soap and not just one layer at the bottom. Alternatively,  chose a clear suspension soap base, which is formulated for suspending additives evenly throughout your soap. 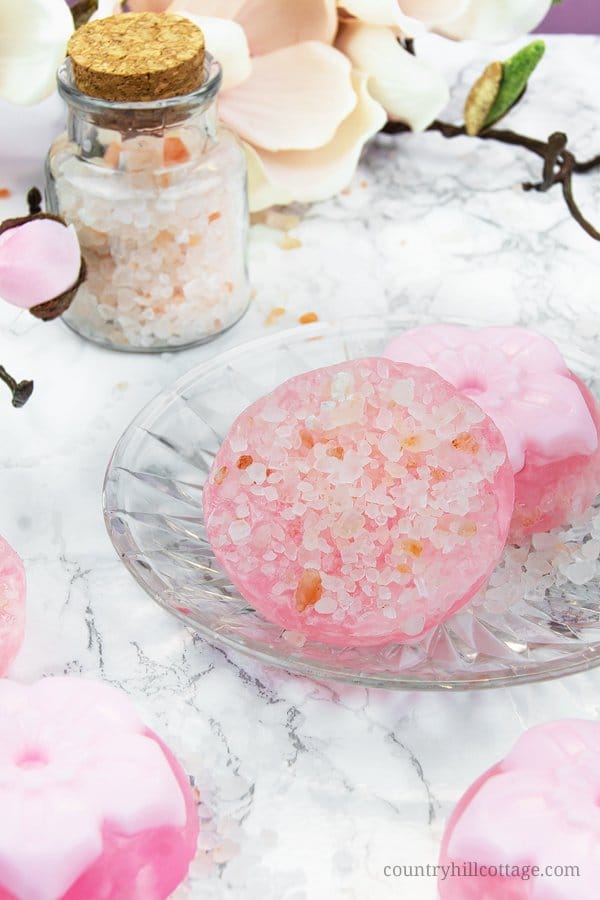 I admit that I picked Himalayan salt mostly because I thought that its distinctive pink hue would compliment the pink shades of the soap beautifully. Aside from aesthetic considerations, Himalayan salt is said to have many benefits. Himalayan salt is unrefined and shares a higher content of trace minerals than refined table salt. Its coarse crystals are an excellent exfoliant and will give a good peel and cleanse the skin. You can also swap it for dead sea salt or Epsom salt, whatever you have available or prefer.

For added skin care, I enriched the soap with vitamin E oil. Vitamin E oil is a versatile and useful ingredient for homemade skin care products and aids anti-ageing treatments. It acts as a natural antioxidant neutralising free radicals while helping to moisturise and soften the skin. 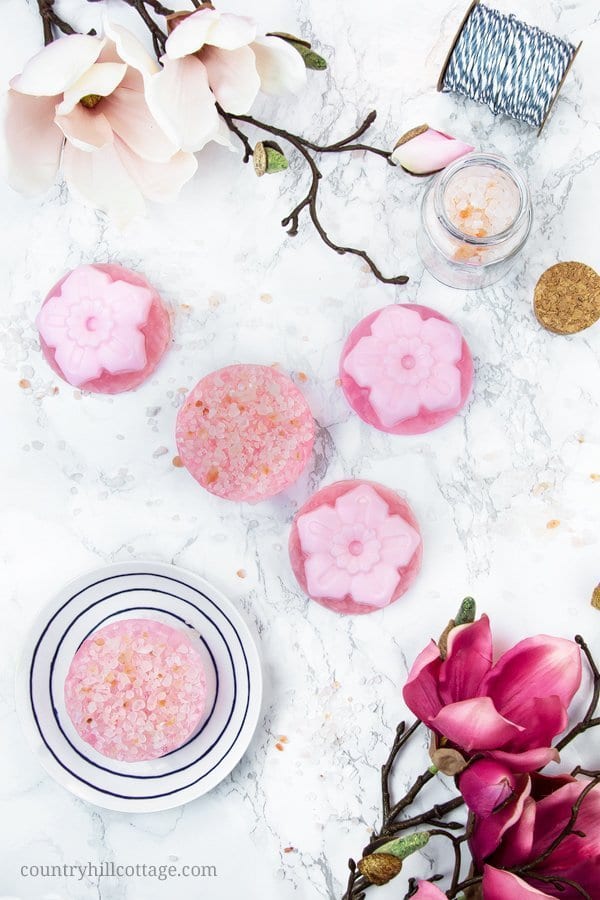 It’s currently spring in London, which means the city’s roads are lined with blossom-studded magnolia trees. I tried to capture the beauty of the magnolia flowers in this soap and therefore chose a lovely magnolia fragrance oil to scent my exfoliating soap bars. Magnolia absolute essential oils exist, but these are usually outrageously expensive or smell disappointing. You can add essential oils at a 2% concentration. At the moment, I’m loving this Soothe and Honeybell  essential oil blends from Plant Therapy (not sponsored, PT just has lovely products.) Another fun idea is to fragrance the flower embed and the exfoliating part with two different scents.

I tinted my DYI exfoliating soap pink with a shade from this set of liquid soap colours. This colourant is very potent so use only tiny amounts. The colours are suitable for many homemade bath projects so you can repurpose them for other beauty DIYs. If preferred, use micas or colour blocks instead. 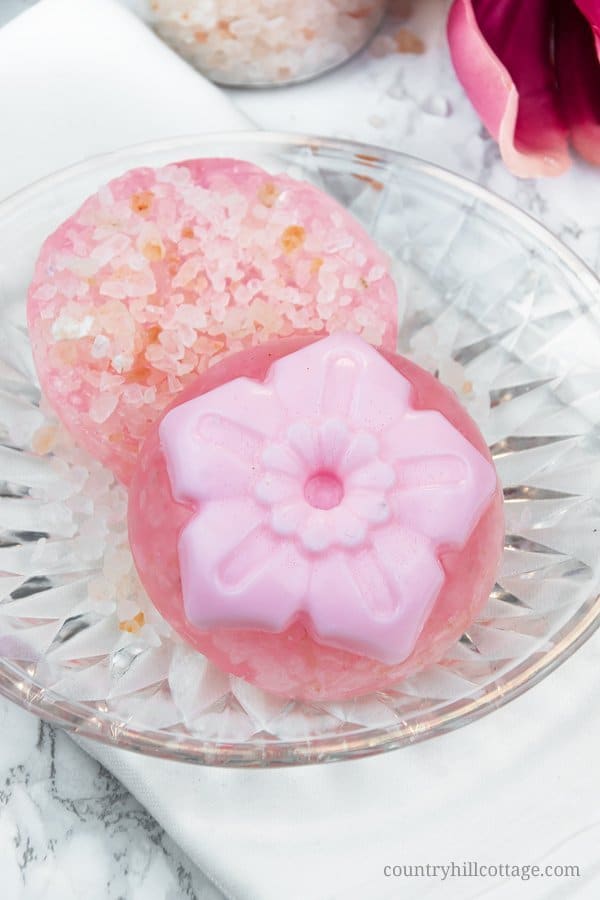 I chose a mould with a simple 5-petal flower, which I pretend to be a magnolia. The petals are relatively large, which makes it easy to cut away the excess soap when creating the flower embed. I found this set of 3 silicone moulds with 3 different flower designs on Amazon. Working with all 3 moulds enabled me to pour the soaps in one go instead after one after another. I will use the other flower designs in future projects. Shapes with small, intricate petals won’t work as well for this technique. But don’t fret if you have a dahlia or rose mould and use it instead. 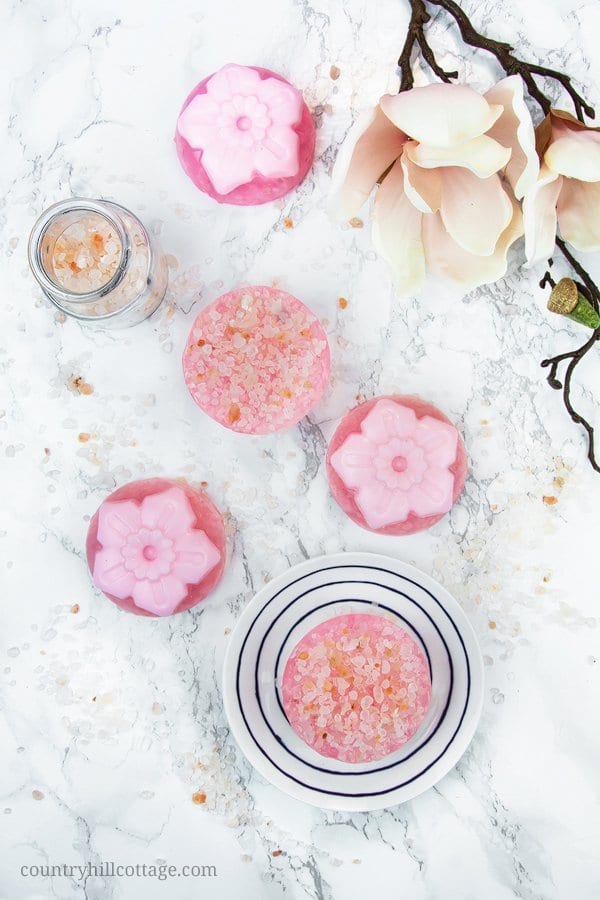 The pretty and feminine design makes this soap the perfect little homemade spring gift, DIY Mother’s Day gift, birthday present and Easter basket stuffer. It’s an excellent present for hostesses, housewarming, and of course to treat yourself! I put the magnolia soap bars into cellophane gift bags, added one of our printable gift tags and tied the whole thing with a piece of twine. Super adorbs, don’t you think? 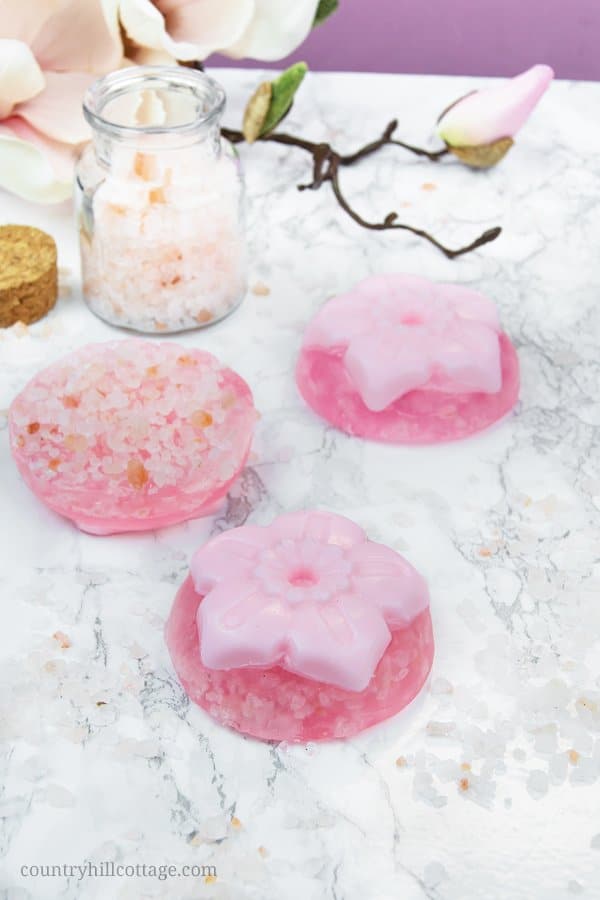 If you look closely, you can see specks of Himalayan salt shining through the clear soap base. The salt not only turns this DIY soap bar into a homemade exfoliating soap but also adds visual appeal. 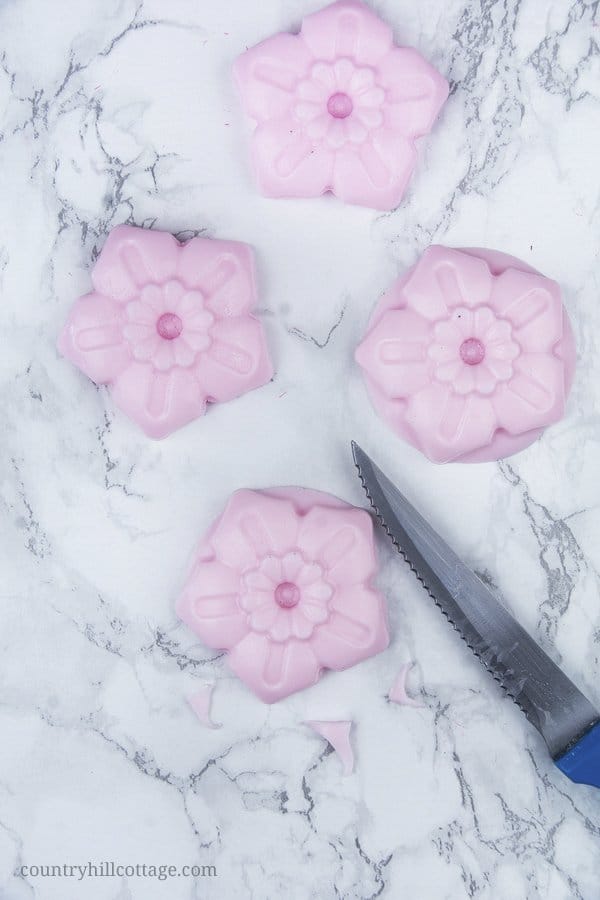 I used a pairing knife to remove the excess soap between the flower petals. This step is optional but will give the embeds a more refined look. 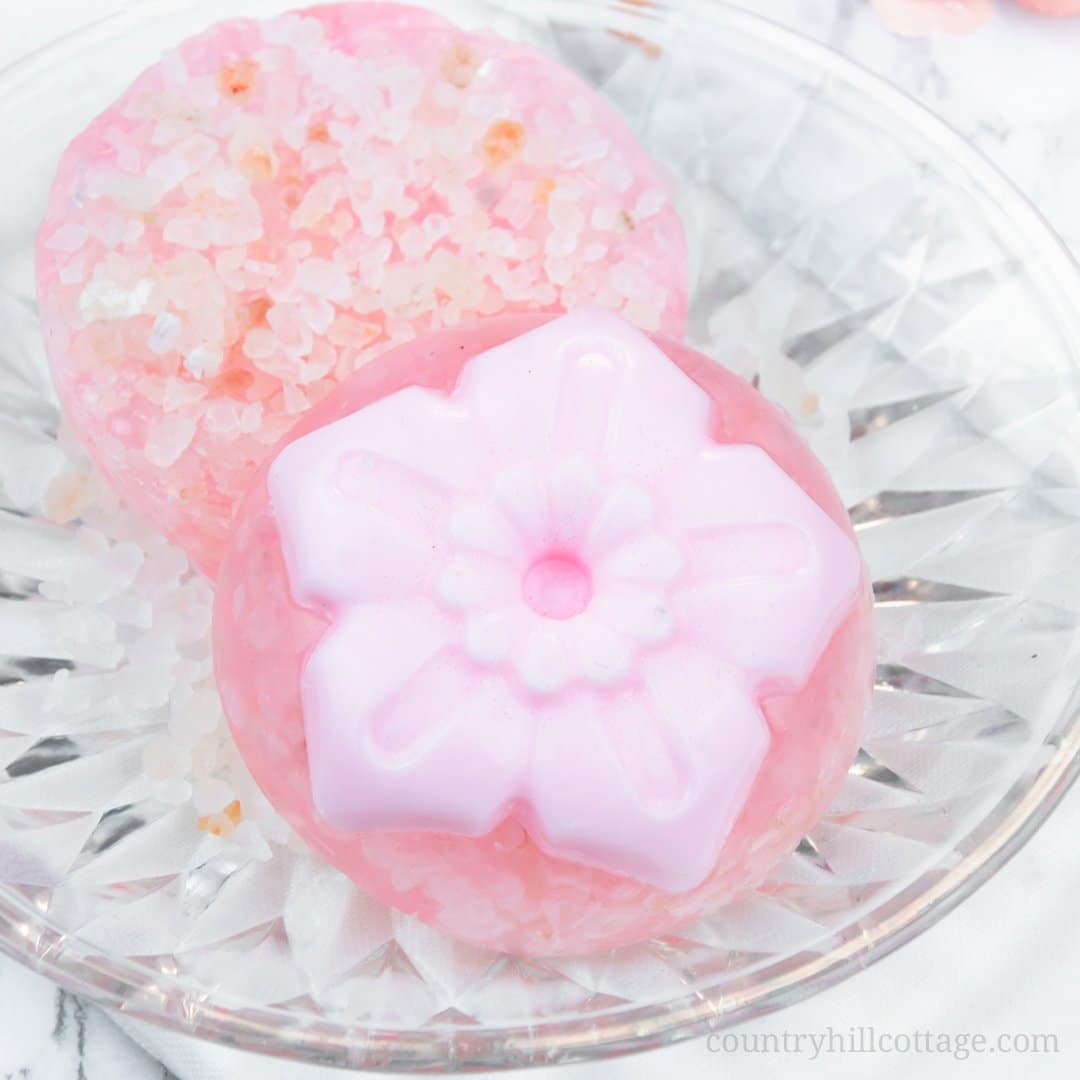 The amounts stated in the soap recipe below are enough to make six 100 g (3.5 oz) soap bars. The silicone moulds are very soft and flexible. I recommend putting the moulds on a tray or cutting board so you can lift and move them into the fridge for chilling without spilling liquid soap.

For the melt and pour DIY peeling soap

1) Melt the white soap base

Using a soap cutter, cut the goat’s milk or shea butter soap base into 2.5 cm (1 in) cubes and place them into a microwave-safe jug. Melt the soap cubes in the microwave set on low in 60-second bursts and stir gently in-between until the soap is liquid.

Add a small drop of pink soap colourant, the vitamin E oil and up to 5 g (0.17 oz) fragrance or essential oil to the base and stir until the colour looks uniform.

Tip: One small drop creates a pretty pastel hue. Simply add a little more if you prefer a stronger colour.

Place the silicone mould(s) on a tray or cutting board. Slowly pour the soap into the flower part of the mould. Then spray the top of each cavity with rubbing alcohol to dissolve the bubbles. Place the moulds in the fridge for 30 minutes or until the soap feels hard to the touch.

Release the flowers from the mould and using a painting knife cut away any excess soap between the petals (see photo above). Return each flower embed back into the cavity. This step is optional. If you’re short on time skip it and continue with the fifth step.

5) Melt, tint and scent the clear soap base

Repeat steps 1 and 2 with the clear soap base. Scent the soap with up to 7 g (0.25 oz) of fragrance or essential oil. For a light hue, only add the tiniest amount of pink as the soap colourant will be much stronger in a clear soap base than an opaque one.

6) Layer the clear soap base and Himalayan salt

Tip: I only filled each cavity 2/3 with soap as I wanted slightly smaller soap bars. For bigger bars fill each mould to the rim.

Allow the soap to harden for several hours at room temperature or in the fridge for about an hour.

Once the soap is fully hardened, gently flex the mould to release the soap bars.

How to use the exfoliating soap

Use the exfoliating soap on your hands and body like you would use any other soap. You can exfoliate your body in the shower or when you take a bath. Wet your skin and rub the soap over your skin using gentle pressure. Rinse off any excess soap and continue with your skincare routine.

DID YOU MAKE THIS DIY?

DID YOU MAKE THIS DIY?

Tab the images below and discover my other natural beauty and skin series! 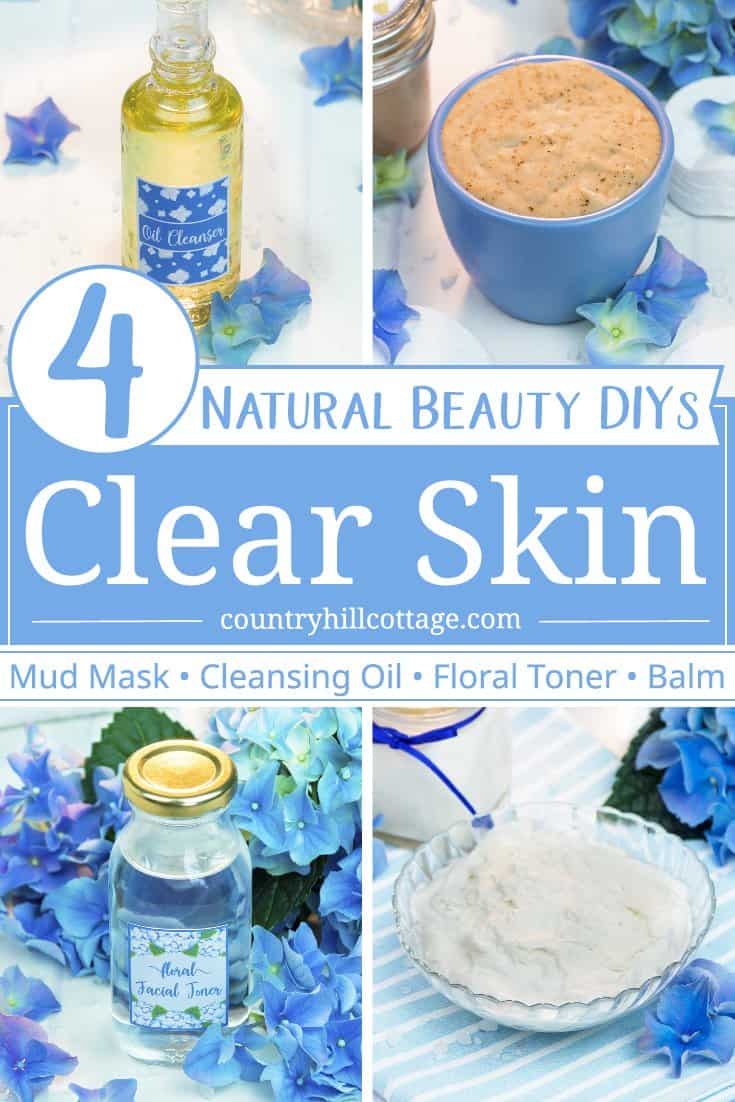 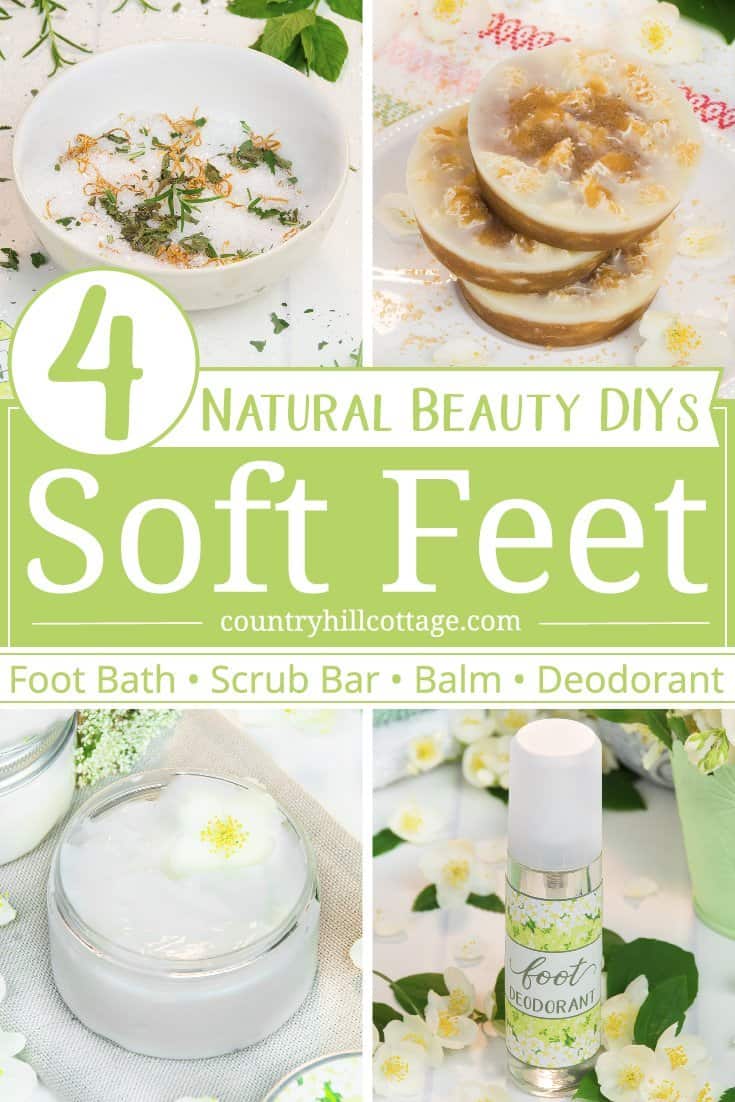