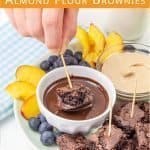 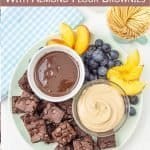 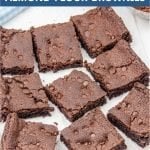 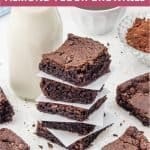 Moist, decadent, and fudgy gluten-free almond flour brownies melt in your mouth and taste super chocolatey. These flourless, grain-free, dairy-free, and paleo-friendly brownies have a crispy crust and chewy, moist inside. This homemade brownie recipe is perfect for kids and families and can be made vegan, too.

Disclosure: This post contains affiliate links, meaning, at no additional cost to you, we will earn a small commission if you click through and make a purchase. Learn more

For the most part, Cyna and I like the same cakes and desserts with one major exception: chocolate. I love chocolate in all forms and variations. Just thinking about these chocolate chip walnut brownies, pudding brownies, banana pudding brownies, chocolate mousse tart, or chocolate tartlets makes my tummy rumble. Cyna, on the other hand, not so much. Umm yeah, I don’t get it either, but since this means more healthy chocolate treats for me, I’m cool with that.

I haven’t had a homemade fudgy chocolate dessert in a while, so I suggested we whip up a batch of ooey, gooey, sticky, sweet, soft-centred brownies. And let me tell you: these brownies taste soooo good, fudgy, and indulgent.

Honestly, you would never guess that the brownies are paleo, gluten-free, grain-free, refined sugar-free, and dairy-free. I like nutritious food and clean eating, but healthy desserts still have to be delicious.

Our recipe uses both chocolate chips and cacao powder, so you really get a mouthful of dense, rich chocolate cake with every bite. For extra indulgence, I also insisted we top the whole thing with extra chocolate chips, you can thank me later.

I’ll let Cyna walk you through this chewy gluten-free almond flour brownie recipe, while I enjoy another brownie and a glass of cold macadamia milk. Chocolate foodie heaven for real!

You don’t have to follow a grain-free/low carb diet or be gluten intolerant to love brownies with almond flour. This nut flour is low carb and diabetic-friendly. It also adds moistness, texture, and density – all qualities we want in a good fudgy brownie.

What’s the difference between almond flour and almond meal? Can I substitute the two?

Almond meal and almond flour are both types of finely ground almonds, and the three terms are sometimes used interchangeably. Usually, almond flour describes finely milled, blanched almonds, whereas almond meal has a coarser texture and can be made be from whole (with the skin on) or blanched (skin removed) almonds.

I only tried this recipe with finely ground almond flour. Almond meal will result in a different texture but might be delicious, too. If you try the brownies with almond meal, leave a comment and let me know how your brownies came out.  You can also use half almond flour half ground hazelnuts.

I wouldn’t use freshly ground almonds as they contain more moisture than premade flour and will make the brownies oilier.

Can I use coconut flour, too?

Coconut flour is another low carb wheat flour substitute. It has slightly more carbs than almond flour and absorbs much more moisture. For this reason, I wouldn’t use coconut flour as a substitute for almond flour in this recipe.

What type of chocolate do I need for fudgy almond flour brownies?

While I prepared the brownie batter with semi-sweet chocolate chips, bittersweet or dark chocolate can be used instead. Milk chocolate might be a bit sweet and will make the brownies crumblier, but if that’s how you like your brownies, go for it.

The brownies get the rich chocolate flavour also from the addition of raw cacao, which can be substituted with the same amount of unsweetened cocoa. I won’t go in detail here, just know that cacao and cocoa are differently processed and the former has a higher nutritional value than the latter. You can learn more about the differences between cacao versus cocoa here and here.

However, you can use regular sugar or another unrefined sugar in an equal amount. For more info about unrefined sugar alternatives, check out the info section in my 4 ingredient peanut butter cookies recipe.

Interested in low-carb and sugar-free brownies? Then check out this keto cocoa brownie recipe from Gnom-Gnom.

As far as butter goes, you have a few options. For this recipe, I recommend a butter or fat that is solid a room temperature. Not all of the suggestions below are suitable for a paleo diet. I still included them as options and alternatives.

I used refined coconut oil, which I know it isn’t paleo, but I wanted to avoid the coconut flavour.

For super moist and gooey chocolate brownies, use a light tasting oil that is liquid at room temperature like sunflower oil, olive oil, or avocado oil.

If you’re looking for a vegan almond flour brownie recipe or are on an egg-free diet, prepare this vegan egg substitute with ground flax or chia seeds. The amounts listed below are enough to replace the eggs in the recipe.

How do I make a vegan flax/chia egg with two ingredients?

If using whole seeds, grind a few tablespoon flax or chia seeds in a coffee grinder.

Put in the fridge for 15 minutes to thicken.

As a side note, this vegan egg replacement will make the brownies fudgier as the batter doesn’t rise. Even if you’re not following a vegan diet, a falx egg might be just what you need for perfectly chewy chocolate brownies.

A small amount of baking soda gives the brownies a soft and mellow texture. Baking powder can be used as well. Some brands of baking powder contain cornstarch so it may not be suitable for a paleo diet.

Using vanilla extract or vanilla bean paste and a pinch of fine grain sea salt is entirely optional. I think both ingredients pair perfectly with chocolate and add more depth to the flavour of the brownies.

Now that you know what ingredients you need to bake delicious fudgy chocolate brownies with almond flour, let’s have a little fun and talk about ways you can customise this homemade brownie recipe according to your preferences.

Irena sprinkled 1/4 cup / 40 g / 1.4 oz chocolate chips on top of the brownies before baking, turning these brownies into triple chocolate brownies. Cocoa nibs, caramel chips, or white chocolate chips would be delicious as well. The products I have listed here a re vegan and dairy-free but you may have to check the ingredients list to see if they are suitable for the paleo diet.

For more crunch, incorporate a 1/3 cup / 50 g / 1.7 oz chopped walnuts, pecans, macadamia nuts, or cashews into the brownie batter. Don’t use nut chunks for toddlers as they may choke on the nuts.

While melting the chocolate and butter, dissolve 1 teaspoon espresso baking powder in the mixture. These brownies feature a wonderful aroma blend of chocolate and coffee and are more suitable for an adult palate.

For festive holiday brownies, mix 1 teaspoon ground cinnamon or gingerbread spice into the brownie batter. A handful of dried cranberries would make another festive and tasty addition.

How to make gluten-free brownie bites

Instead of slicing the brownie into larger squares, cut tiny brownie bites. Brownie bites taste delicious dipped into strawberry sauce and are a great treat to sever as finger food at a kid’s birthday party, on buffets, or to dip into a chocolate fountain.

Serve the brownie bites with toothpicks/cocktail sticks on a large plate next to whipped cream, chocolate sauce, and fruits.

Before jumping to the recipe, read the tips below to learn how to make the best gluten-free almond flour brownies. The process of making this delicious paleo-friendly dessert is very easy and quick.

I baked the brownies in a 8 in x 8 in / 20 cm x 20 cm square baking pan/tin. You can use a slightly smaller pan/tin for thicker cakes, or a larger pan/tin if you prefer thinner brownies.

You can grease the pan/tin with non-stick cooking spray, but I find it easier to lift out the cake when the pan/tin is lined with parchment/baking paper.

You don’t have to set up a double boiler to melt the chocolate, sugar, and coconut oil. Instead, heat the three ingredients in a small saucepan on the lowest flame while stirring constantly.

The chocolate coconut oil mixture needs to cool for 5 to 10 minutes before whisking in the eggs. If the mixture is still hot, the egg white will curdle.

No mixer is needed to make this one-bowl brownie batter. Put the dry ingredients into a mixing bowl, pour the wet ingredients on top and whisk together. Done. To avoid overbeating, stir the mixture only until the ingredients are just combined and no dry lumps are visible.

Bake for 20 to 25 minutes. I found that testing the cake is useless. We want soft and fudgy. Baking until a toothpick or cake tester comes out clean will result in dry, crumbly brownies. The brownies will firm up while cooling.

If you don’t want to fuzz with cutting, bake the brownies in a muffin pan/tray. Simply, line the pan/tray with cupcake liners and fill each 2/3 with batter. Bake for 20 minutes.

Irena said that the brownies taste best fresh from the oven when the chocolate chips are still soft and melty. Just let them cool for 15 to 20 minutes before digging in. My husband liked the brownies better the next day because the chocolate aroma was even stronger the texture chewier.

How do you like brownies? Warm out of the oven or cold and chewy?

Package the brownies in an airtight container putting wax/greaseproof paper between layers. Brownies made with eggs will stay fresh for up to 3 days at room
temperature. Egg-free brownies have to be stored in the fridge.

Can you freeze gluten-free brownies?

Yes, this is a freezer-friendly brownie recipe. To freeze, cut the brownie into squares and layer the squares into a freezer-safecontainer or zip lock bag. Separate the layers with sheets of wax/greaseproofpaper, so the brownies don’t stick together. The brownies can be kept in the freezer for 3 months.

As an Amazon Associate and member of other affiliate programs, I earn from qualifying purchases.

Thanks so much for visiting Country Hill Cottage – we’re so happy you’re here! Have some feedback you’d like to share? Leave a note in the comment section below!