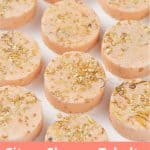 See how to make aromatherapy shower bombs for energy and mood support! Homemade shower fizzies raise positivity and to enjoy a quick spa treatment at home. The shower bombs recipe tutorial shows how to make shower melts with essential oils, plus tips for use and storage.

Disclosure: This post contains affiliate links, meaning, at no additional cost to you, we will earn a small commission if you click through and make a purchase. Learn more

When I’m feeling stressed out, I love to draw a warm bath and relax for a while (usually with my milk and honey bath bombs or lavender bubble scoops). But sometimes there’s simply no time for a 30-minute soak in the tub. Because kids, work, and life!

Staying well and healthy is important for our mental and physical wellbeing. And I believe self care is a big part of that – especially when you’re busy and stressed! And that is where my DIY shower bombs recipe comes in! Shower bombs with essential oils are a quick self care treat and an easy way to include aromatherapy in your day.

The best part of shower soothers? You don’t have to carve out extra any time from your busy schedule. DIY shower melts upgrade everyday showers to a blissful at-home spa experience! Intrigued? Let’s learn more about homemade shower fizzies!

What are shower bombs?

You probably have heard of bath bombs (and if not check out my bath bomb recipes!) – but what are shower bombs? Shower bombs, also called shower tables, shower steamers or shower fizzers, are little disks that dissolve in water and release out a soothing blend of essential oils in the process.

I love shower bombs because they are much quicker to use than bath bombs. No need to run a full tub. Just hop in the shower, let the water run and revel in the warm wafts of steam and essential oils. Shower aromatherapy at its best!

Although shower steamers are somewhat new, steam treatments have a long tradition and benefit the body and mind in various ways. The benefits of shower steamers relate to the essential oil blend you use and can vary from soothing and balancing to stimulating and boosting.

In this post, I’m focusing on energizing shower bomb recipes. The kind you add to your morning shower to wake you up, boost your energy, and lift your mood. Think sunshine and happy thoughts!

To learn EO blends for headache and congestion, check out my wellness shower melts.

And if you want to wind down, try my DIY shower fizzies for relaxation (coming soon)!

Curious about the ingredients in this homemade shower bombs recipe? Here all the details:

The ingredient amounts are listed in the recipe box at the end of the post!

How to make shower bombs

How do you make a homemade shower bomb? Aromatherapy shower tablets need a day to dry, but it takes less than 30 minutes active time to make my easy shower bombs recipe!

Add all dry ingredients in a large, non-metallic mixing bowl and whisk until blended.

Next, add the essential oil, a couple of drops at a time, to the dry ingredients and stir to combine. The essential oils can create droplets, which will be dissolved in the following step.

Tip: Put on nitrile gloves to protect your hands when kneading the mixture. Citric acid can irritate sensitive skin and damage nail polish.

Now, fill a silicone mould with shower steamer mixture. Press firmly into the mould using your fingertips and pay attention to the edges.

Tip: If using dried herbs or flowers, add them before filling the mould with mixture.

Allow the homemade shower melts recipe to dry for 24 to 48 hours. The shower soothers should feel hard and solid. To unmould, carefully peel back the mould and gently pop out the shower disks.

Tip: Making shower melts can be affected by humidity. In a humid environment, the drying time may be longer.

When I shared my eucalyptus shower steamer recipe, one question came up a few times:

My shower steamers are expanding, what am I doing wrong?

If the mixture is too dry, the homemade shower melts can turn out crumbly and fall apart. You can still save the batch, by breaking and crumbling the steamers into a bowl, reconstitute with witch hazel and mould again.

The best shower bomb recipes for energy and mood support

This wake up shower melts recipe perfect to start the day right and will have you ready for the day ahead. I used peppermint, tangerine, Douglas fir, and lavender essential oil to create an invigorating scent and decorated the product with pressed flowers.

These uplifting citrus shower steamers are for those moments when you’re feeling down and need a little pick-me-up. Grapefruit, orange, and lemon essential oil come together in an uplifting citrus blend that will have you feeling happy and well.

I decorated the melts with dried calendula and granulated orange zest.

When you feel tired and low on energy, try one of these energizing shower fizzies! Orange, peppermint,  lemon, and eucalyptus essential oil team up to boost your energy and wash stress down the drain.

For decorating, I mixed a gold mica and isopropyl alcohol into a thick paint and applied a broad stroke after the shower steamers had dried.

How to use shower bombs

What do you do with a shower bomb? Shower steamers are so EASY to use. Just put one at the bottom of your shower, turn on the water and enjoy an aromatherapy shower. It’s that simple!

Here are my best tips to make the most of your homemade shower bombs recipe:

How many times can you use a shower bomb?

Since these DIY shower bombs are pretty small, they will last for one shower.

How to store shower bombs

Essential oils are volatile. So, store the aromatherapy shower steamers in an airtight container or jar, away from direct sunlight. Ensure that they aren’t exposed to water or moisture.

DIY shower soothers last for 1 year. You can top up the shower steamers with a few drops of essential oils if you notice that the fragrance has fainted.

Why use citric acid in shower bombs?

The citric acid reacts with the baking soda to produce the fizzing reaction and release the essential oils into the air. Without it, you won’t get a reaction that produces this reaction. Another benefit is that citric acid hardens the shower soothers.

Can I make shower bombs without citric acid?

Yes, you can make shower melts without citric acid. If you live in an area with high humidity, you might get a better result if you omit the citric acid. Just replace the citric acid with the same amount of half arrowroot powder and kaolin clay.

One thing I noticed is that shower tablets without citric acid are softer and crumblier.

No, shower bombs and bath bombs are not the same. Here are the main differences between shower steamers vs bath bombs:

Have a question I didn’t answer? Drop a comment below!

If you like these shower bombs, you will also enjoy my other shower tablet recipes:

Or try these bath bomb recipes:

Did you make this project?

Thanks so much for visiting Country Hill Cottage – we’re so happy you’re here! Have some feedback you’d like to share? Leave a note in the comment section below!