Enjoy delicious chocolate doughnuts with a shiny chocolate glaze! In this post, we share our recipe for moist and moreish baked doughnuts and a three-ingredient chocolate glaze that tastes rich and looks beautifully glossy. And check the links below for more doughnut recipes and download a cute printable doughnut box at the end of this post!

If you’re anything like us you will have more than one of these delicious chocolate doughnuts! Watch our video tutorial for the step-by-step recipe! 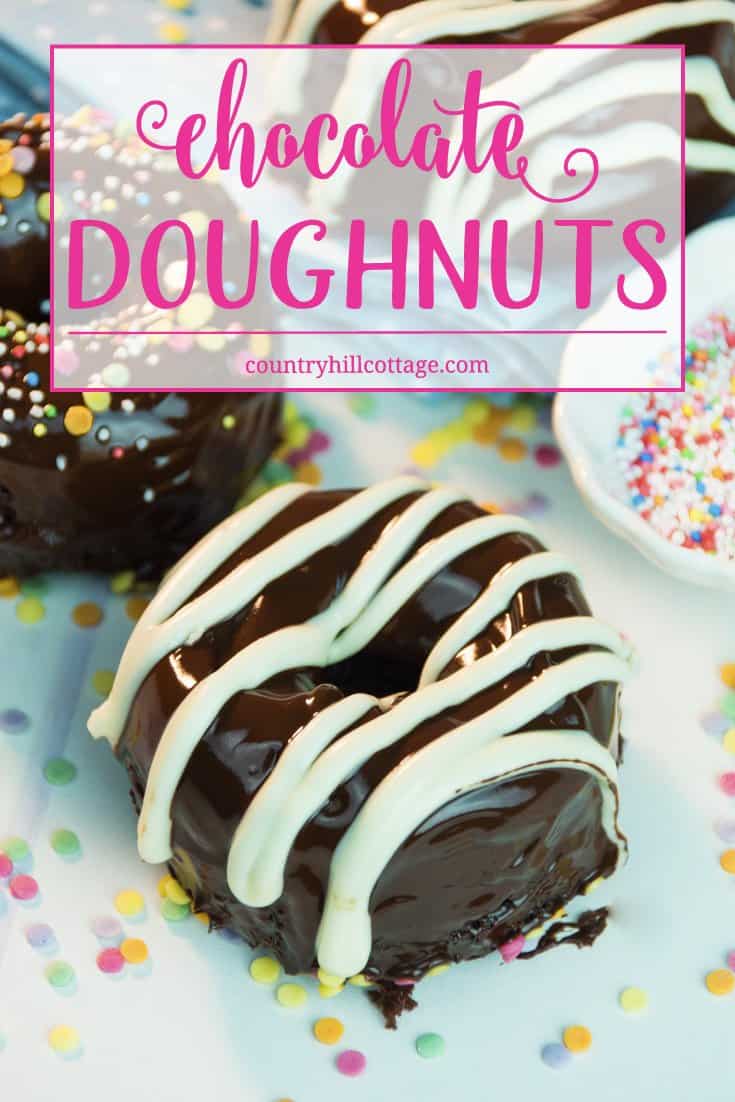 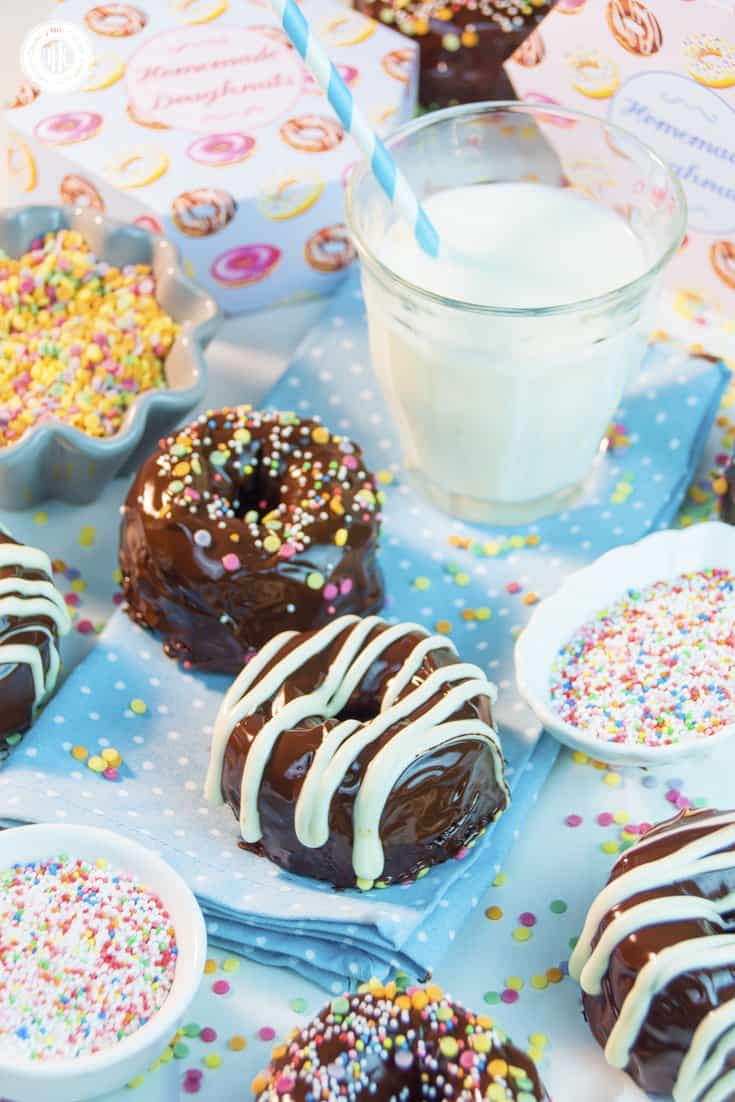 Have a look at the links below to for more scrumptious doughnut recipes: 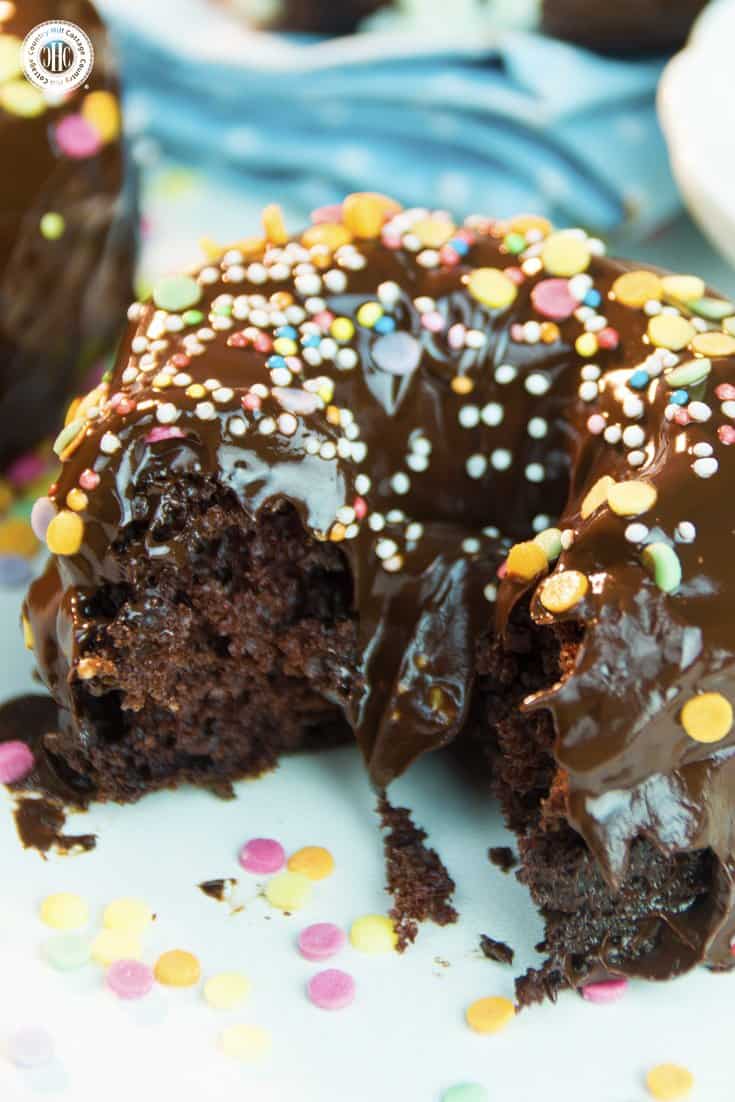 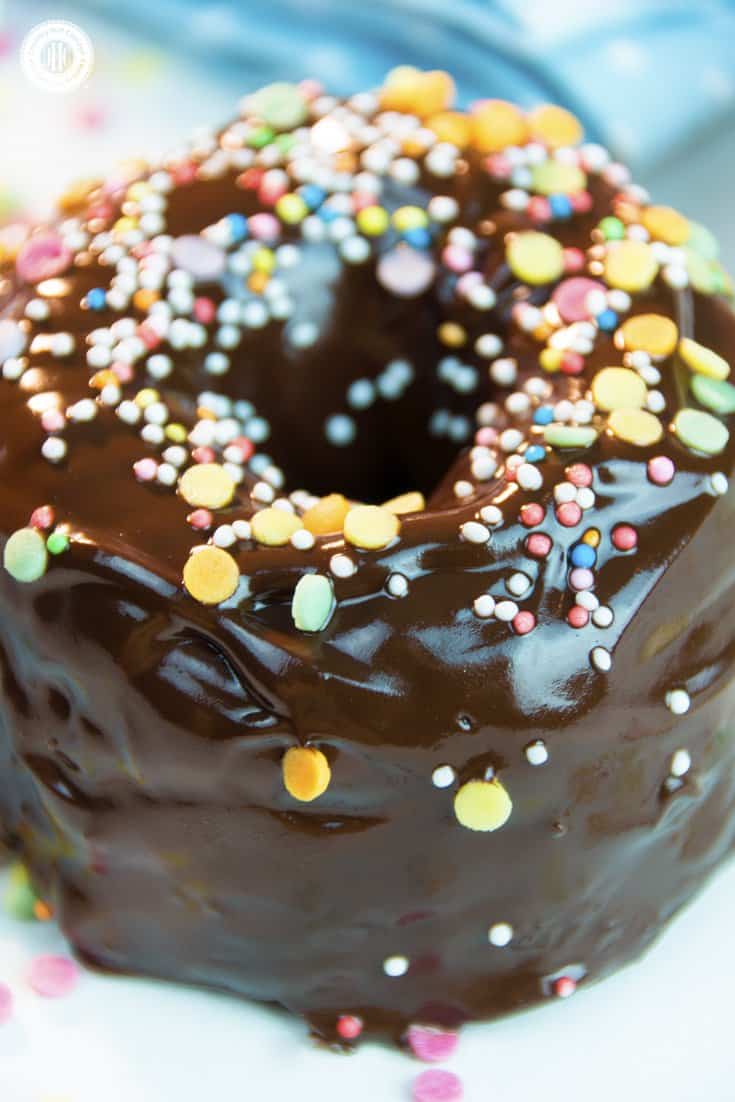 You can prepare this recipe with fresh or dried lavender, just make sure it’s culinary lavender intended for consumption. 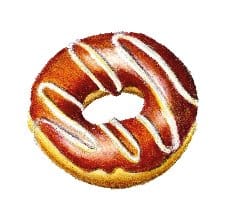 Add the butter and sugar into a large mixing bowl and beat until pale and fluffy. Add the first egg and mix to combine. Then add the second egg, vanilla extract and vinegar and mix until blended. Add the flour, cocoa, baking powder, soda, salt, and buttermilk. Stir until roughly combined and the give the batter a quick whirl with the mixer.

Transfer the batter into a large piping bag and fill the holes of the doughnut tin two-thirds with batter. Bake the doughnuts for 15 to 18 minutes. Remove from the oven and allow to cool to the touch.

Add the chocolate to a double boiler and melt over a low flame until the chocolate has completely melted. Be careful not to get any water into the chocolate while melting, so the chocolate doesn’t become grainy. Alternatively, melt the chocolate in the microwave. Add the butter and honey or agave syrup, and stir until well incorporated but avoid whipping air into the glaze.

Fill the chocolate glaze into a piping bag and generously cover each doughnut with glaze. We put the doughnuts on a cooling rack placed over a baking tray to catch drippings and to make cleaning up easier. Alternatively, dip each doughnut into the glaze. If desired, decorate the doughnuts with sprinkles or strips of melted white chocolate. 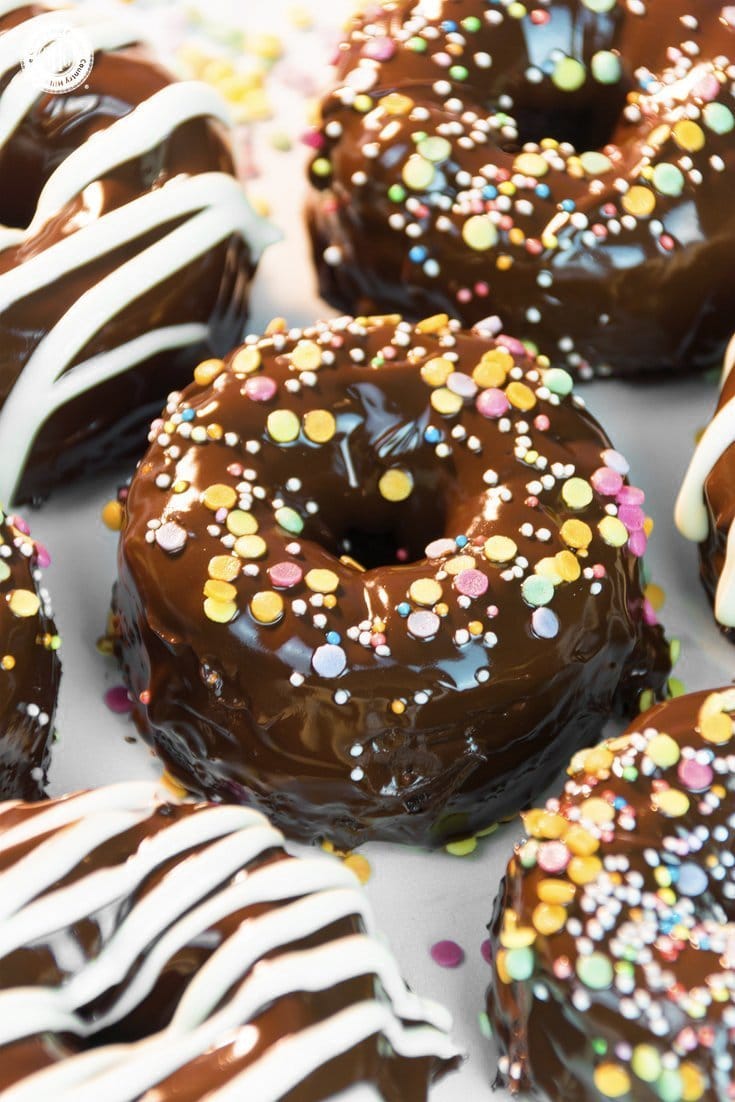 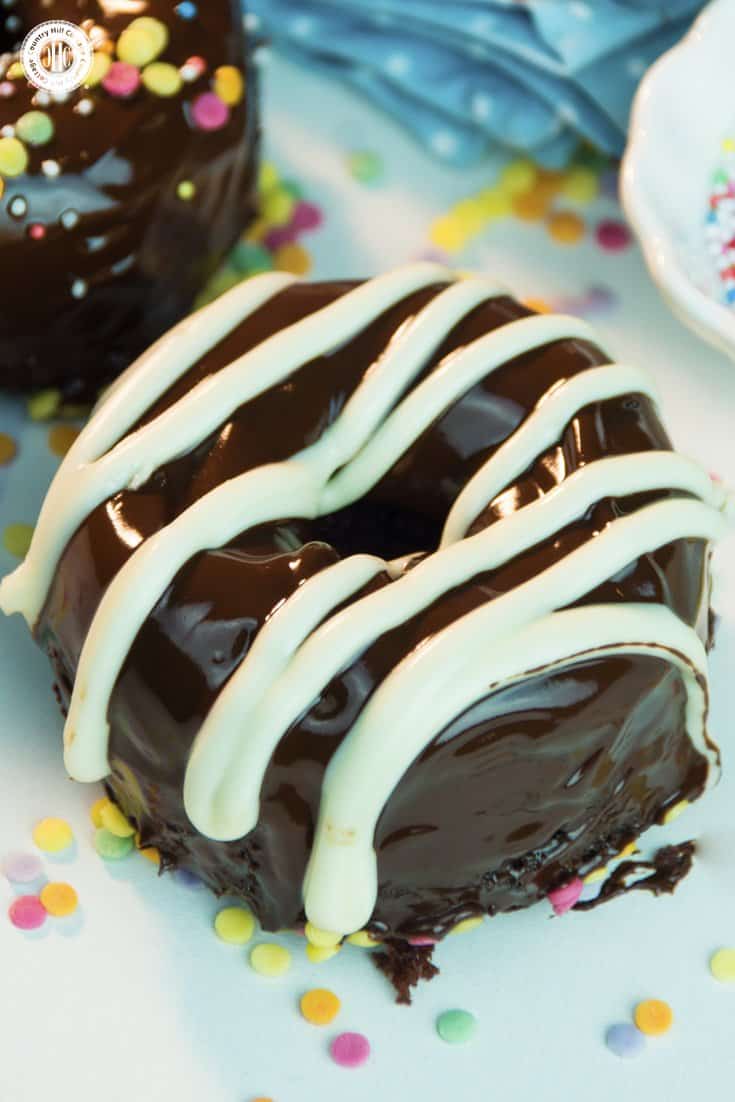 Print the printable lid and bottom on DIN A4 or US letter size cardstock or photo paper and cut out the two components along the grey lines. Working with a bone folder and ruler, crease along the grey lines and fold the sides inwards. Put glue on all the flaps that say “Glue”. You can either use double-sided tape, a strong glue stick, or superglue. To assemble the lid, adhere the sides parts so that a hexagon forms. Repeat this step for the bottom part, too. Now the box is ready to be filled with doughnuts!

Tip: We also printed the decorative pattern on the back of the printables so the doughnut box looks pretty on the inside as well. 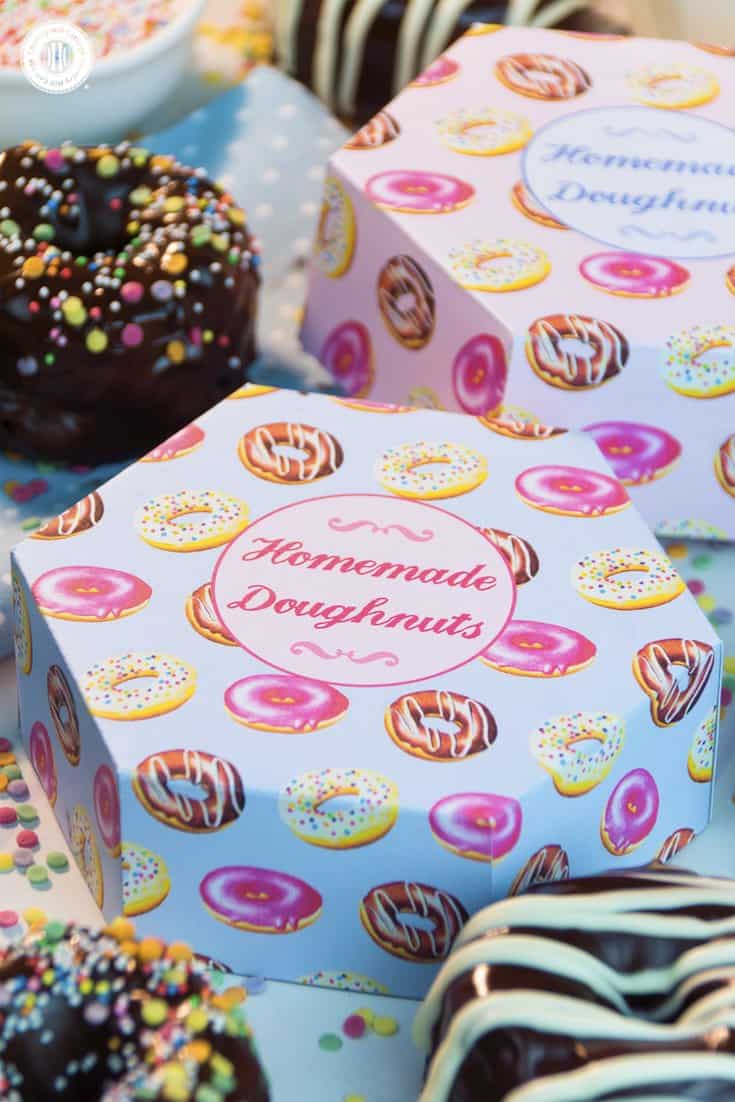 Click on the button to download your free printable doughnut box to gift the chocolate doughnuts in style!